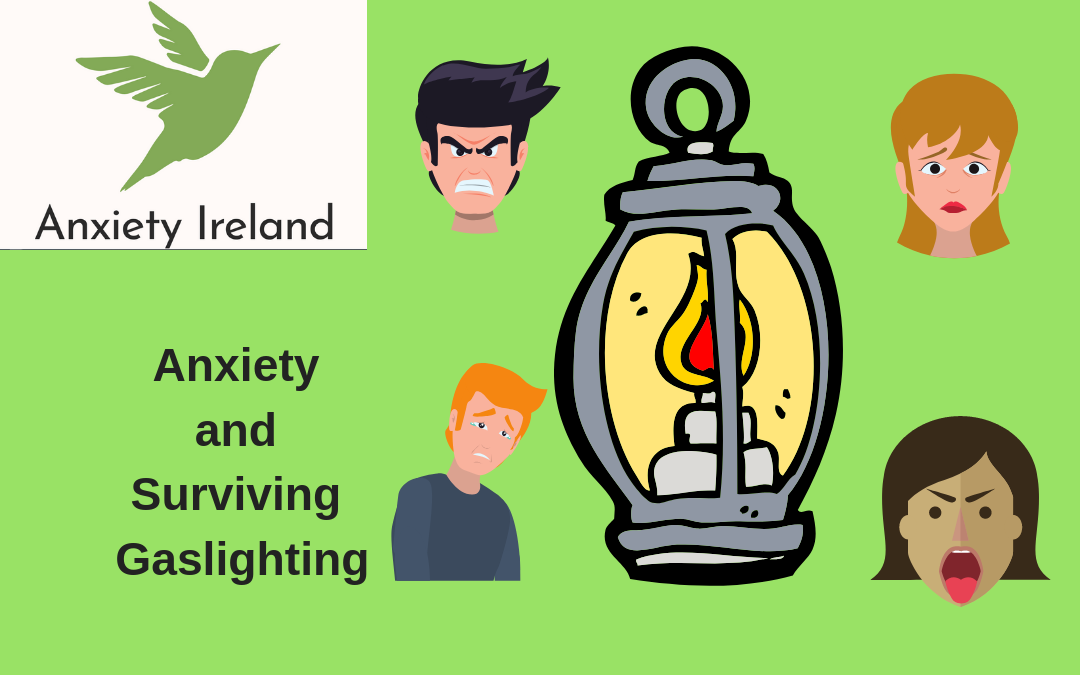 Gaslighting is a serious problem in the 21st century world of relationships.

Anyone who has unfortunately suffered this tactic will tell us it is confusing, debilitating, disorientating and erodes self belief, confidence and our intuition!

Surviving being with a gas lighter or a narcissist takes massive courage.

But what is gaslighting?

The term comes from the 1938 film Gaslight which spawned later film adaptations.

The play/movie is centred around a husband and wife. The husband tries to convince the wife that she is imagining things and going crazy. He does this by changing/dimming the gas lighting in the house and denying it’s different.

He uses this as a tactic to make her doubt her own reality. The term now covers any kind of deliberate attempt to make another person doubt their version of reality or what they have just experienced.

This is often so that the perpetrator can get away with something or so that they can gain the upper hand on the other person.

The resulting formula can take many forms. But if the gas lighting is successful the person being wronged often ends up feeling like they are the ones at fault.

Some examples may be that a partner senses that another partner is unfaithful. Even if they have evidence they are told over and over again that they are imagining things, are crazy or paranoid.

Another tyoe can occur in an incident where angry or mean words are said. The other person may completely deny that this happened and tell the other person they are imagining things.

The abuser typically says things like “‘U are crazy”, “I’m worried about U”, “don’t be so sensitive”, “U are being paranoid”…

Often this is done with such conviction that the person being manipulated may begin to doubt to themselves.

This is what the gaslighter wants. The gaslighter will effectively manipulate the other person into a reaction to what they know is wrong but then use that as proof… “look u are hysterical”.

It is debatable whether or not some perpetrators even know they are doing this or not… but either way it leads to terrible destruction in the world of the intended target.

Gas lighting tends to come along as one of a range of control techniques used by insecure, manipulative partners and persons.

Another tactic very popular is that of love bombing. This is where the person at first comes on so strong and romantic that the other person if unsuspecting can’t help but feel that all their christmases have come at once. They finally found someone.

The manipulator will move things at a frantic pace and often seemingly pours their heart out and declares love for the other person.

This hooks them in as they create an image in the others mind of themselves as decent, loyal, loving and caring.

When this is done they may begin to erode the self esteem of the other person.

Comments, blaming, undermining, trying to make the person feel unlikable/unlovable and lucky to have the perpetrator are common.

Isolating the person from family and friends, disrupting their normal life, taking decisions out of their hands and financial manipulation are common as well.

This is all designed to make the other person feel dependent while taking full advantage.

This can then lead to the most underhanded of all. The Gaslighting.

Gas lighting if successful leads to a plethora of problems. It makes a person doubt their very own concept of reality.

This leads to enormous stress on the body as our gut feelings and intuition scream at us something isn’t right, but they go ignored or repressed.

The isolation, the shame and the self dislike become unbearable.

Feeling like can’t be trust ourselves and that the other knows best.

They know something is badly wrong but aren’t strong enough to leave.

The way humans often react to our own suffering is by attacking ourselves. This makes things much worse as the shame and powerlessness builds.

In this state, although the mood swings and vile behaviour of the perpetrator may intensify, the gaslightee may feel terrified of losing them and being alone.

This is inconceivable to family and friends who don’t understand what has happened to their confident and independent loved one.

Many times the gaslighter or narcissist just keeps intensifying their bad behaviour to the breaking point of the gaslightee.

There comes a point for everyone where enough is enough.

I have heard it said that when someone treats us badly we will allow it up and until the point of badness that we would treat ourselves.

However, these manipulators often can’t help themselves: enjoying the dominance too much many finally cross our line of what is acceptable.

Those who finally manage to leave often don’t get a quick escape and it takes months or more to build up the courage.

Threats, promises, love bombing, talk of suicide from the gas lighter are common as they try to regain control, but any return to them often leads to a return to bad behaviours.

When a person is finally free the scars remain from this damaging and toxic form of manipulation.

Moving on with life:

Leaving this kind of relationship I’ve been told is akin to feeling ripped apart.

The manipulator often makes themselves so indispensable and deskills a person so much that they feel utterly helpless and abandoned when they finally say enough is enough!

There is a process of reintegration with life as it was before, but the doubts remain about our abilities.

But the gaslightee is no fool! Narcicists and gaslighters go after the best and brightest… their fragile egos demand it.

The problem is with them! They carry the damage!

Many of the clients I speak to after gaslighting feel nervous of getting into new relationships and find that their trust can feel broken.

In new relationships it is nearly impossible to not be triggered. A fear of history repeating itself, being duped again, being cheated on or being controlled are seriously common.

Left unprocessed this kind of misadventure can destroy lives and hold us back indefinitely from happiness.

The reason I write about this topic is because it is so common, isn’t talked about enough and it is possible to rediscover life through counselling.

From my practice in Glasnevin I have worked to help many clients to process the effects of gaslighting, to enter new relationships, to work to build their self esteem and to kickstart growth and happiness again.

Counselling can help when someone is ready to make a change and to get that gaslighter, current or former, out of their lives and out of their heads!

To hear more about how I work with these issues please feel free to message this Facebook page, call/text 087 063 0949, or email info@abatecounselling.com.

I am always happy to chat about how therapy either with myself or with one of my colleagues can help!

Wishing everyone a great week and thanks for reading.

Anxiety is like a merry-go-round, going nowhere, it’s ok to step off